Goldenhar Sydrome is a genetic disorder, with autosomal dominant inheritance and with an incidence of 1:3000 –1:5000 with a Male: female ratio of 2:1. It was first described by Goldenhar in 1952. It is characterized by asymmetry which can be unilateral (hemi facial microsomia) (17315807) or bilateral in 10-33% of cases. The right side of the face is more affected with a sporadic or familial occurrence.

A five year old female child weighing 15 kgs was posted for coloboma repair of both upper eyelids. The birth history and the neonatal period was uneventful. The patient was referred to our tertiary centre because of history of failed intubations (3241587) twice.

On clinical examination, the patient had marked facial asymmetry with micrognathia, mandibular hypoplasia, dental malformation, preauricular skin tags, coloboma of both upper eyelids & limbal dermoid (19783022). The patient also had a clefting of the right half of the tongue. The airway was graded as Mallampatti III and thus a difficult intubation was anticipated. The cardiovascular and respiratory system were found to be within normal limits. 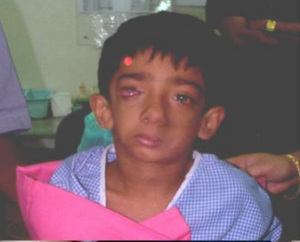 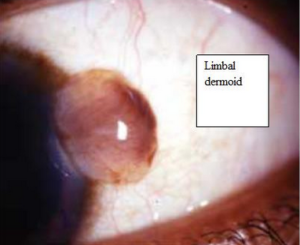 The routine haemogram and coagulation profile were within normal limits. The X ray of the cervical spine showed hemi-vertebrae with increase in the atlantoaxial distance. The chest Xray PA view showed trachea to be in normal position. CT scan mandible revealed absence of the right half of the mandible. 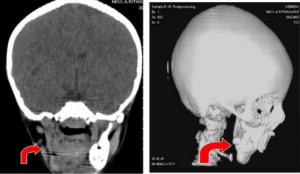 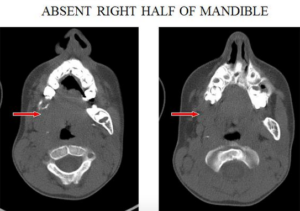 Since the child had a previous history of difficult airway, we planned for a trial laryngoscopy under inhalational anaesthesia. The child was premedicated with Inj.Glycopyrrolate 0.002mg/kg IM 45 minutes preoperatively. Induction was carried out with O2, N2O (50:50) and sevoflurane 6% concentration using Jackson’s Rees Circuit. Intravenous access was secured and 0.45%Dextrose normal saline was started. Following bag-mask ventilation for three minutes, trial laryngoscopy by left molar (19234820) approach was performed. The vocal cords were visualized and hence the child was paralysed with the non-depolarising muscle relaxant Inj.Rocuronium 0.6mg/kg. IV. The child was intubated with 5mm ID portex plain endotracheal tube (ETT). After confirming the placement of the tube with bilateral equal air entry on auscultation and with End-tidal CO2 tracings maintaining between 20-30mmof Hg, ETT was secured. The oro-pharynx was packed with sterile wet gauze. Injection Fentanyl 1mcg/kg was administered intravenously for analgesia.

The intraoperative vital signs were within normal limits. The surgical procedure lasted for about two and half an hour. At the end of the surgery the residual neuromuscular block was reversed with Inj.Neostigmine 0.5mg/kg and Inj. Glycopyrrolate 0.005mg/kg IV.

The patient was extubated completely awake with intact reflexes. The child was shifted to post anaesthetic care unit and was monitored with ECG, SpO2 and NIBP for two hours.

A variety of terms have been used to describe this extremely variable disorder. According to medical literature when malformation primarily involve only one side of the jaw, mouth, eyes it is called as ‘Hemifacial Microsomia’. If abnormalities of eyes and vertebrae are also present it is called as ‘Golden har Syndrome’. Though this syndrome is described by different names, it has been suggested that these entities may represent gradations in severity of errors in morphogenesis.

It is also seen as a common association with CHARGE

The second theory of pathogenesis states the possible causes to be vascular disruption in the region of first and second branchial arches (Poswillo 1973) or Infants of diabetic mothers are at increased risk of OAVS (Wang et al 2002).

Associated features of this syndrome include

Severity of mandibular hypoplasia is graded as

In Goldenhar Syndrome, anaesthetic management depends upon the challenge of gaining airway control and a safe conduit of anaesthesia by delineating the anaesthetic plan. In our case the vocal cords were visualized better by using the left molar approach. A good and vigilant post-operative care needs to be equally stressed. Identification of syndrome and associated abnormalities is very crucial in the management of such patients.