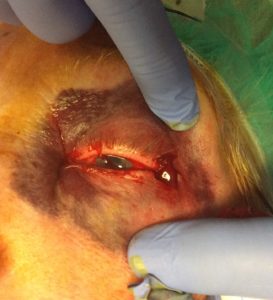 This charming elderly lady (85 years old) presented for a conjunctival covering of a chronic corneal ulcer. During anaesthesiologic work-up, her anamnesis revealed a biological mitral valve graft implanted 4 years before that functioned normally, along with a mixed aortic disease ( ++ stenosis/++ regurgitation) and an EF of 30%. As a substrate of her left bundle branch block the echocardiography had shown impressive paradoxical movements of intraventricular septum paired to diffuse hypokinesia. We talked to her about the “best” anesthesia-modality and concurred with our ophthalmologists that a retrobulbar block would provide best analgesia in this situation, avoid conjunctival chemosis for the operation.
Regional anesthesia was undertaken with ultrasonographic guidance, but immediately upon entering the orbita, touching the orbita’s floor with the needle, menacing signs of retro/bulbar hemorrhage developed. The patient was intubated and an acute canthtomy undertaken. After half an hour of waiting propping the patient “head-up”, she underwent the originally planned operation
She was hemodynamically stable during the operation and regained good cognitive function. Canthotomy was sutured up 5 days later in the outpatient clinic.