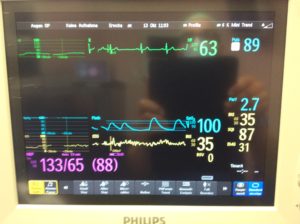 This 78 year old gentleman, known for arterial hypertension and in rather good shape had had several interventions in GA over the last years and had found to be violently delirious after each general anesthesia wich greatly troubles him.

Operations undergone since 2011: prostatectomy 2011, hip-replacement 2013, Laser-excision of soft palate 2015 with consequtive irradiation and flap.
Patient is admitted after a not quite recent retinal bleeding and amotio, a partially scarred situation for circling band, pars-plana vitrectomy cryo and silicone. The surgeon (very kind lad) is adamant that the procedure will take well 1,5 h and insists on giving the patient GA. 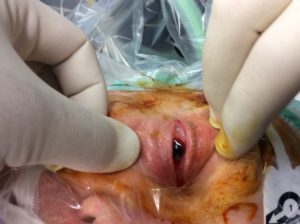 Patient is intubated with propofol and 100 ug fentanyl and a no-snip sub-Tenon with 8 ml mepivacaine + hyalase and clonidine is performed, in this case allowing for chemosis.

Propofol TCI and continuous dexmedetomidine infusion are targeted to a BIS between 30 and 40 showing delta-waves plus slow alpha-waves and spindles.

Patient is cared for by experienced and interested anesthesia nurse. Everything goes well until about 75 minutes into procedure -surgeon manipulating retina near the macula- patient moves and “bucks”. BIS at the time 45, nurse gives boluses of remifentanyl to control situation.

Patient emerges smoothly, comes to well situated for time and place, does not lapse into delirium. 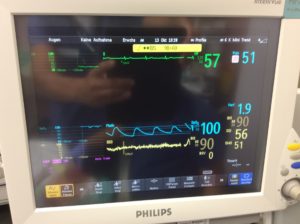 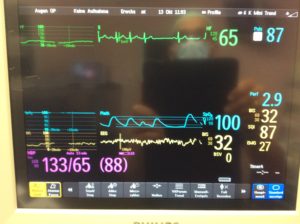